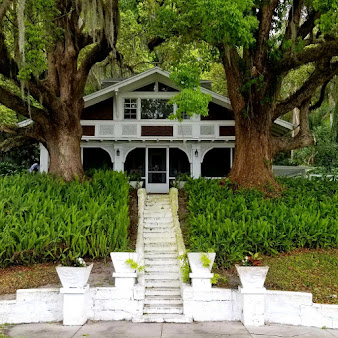 “Atop the terraced green today

That a residence is known too by a name all its own is not that uncommon. Homeowners have named their homeplaces throughout history. Presidents Washington and Jefferson, for example, selected Mount Vernon and Monticello as monikers for their homeplaces. A 19th century Orange County city was named Pine Castle for the name of the Lake Conway residence of author and correspondent Will Wallace Harney. Then too there was Errol Ranch of Plymouth, named for the Scottish birthplace of John & Sarah (Carson) Pirie.

Lake County too has its share of named homeplaces, but it is rare to encounter a residence such as Forsyth Villa, a historic residence having both a name and its very own poetic verse.

“The villa, though, is not the same,

There is a certain lack,

And will be – until you proclaim,

That you are coming back.

Eustis Lake Region newspaper of September 14, 1945 published the Forsyth Villa poem, verse written by Herbert Greenlee (1909-1987), portions of which are included above. A local resident, Herbert Greenlee was paying tribute to a unique winter cottage, a villa built circa 1924 southeast of Eustis and overlooking East Crooked Lake.

Greenlee’s reference to “coming back” however, in my opinion, had been wishful thinking. The poet had to have known the beloved occupants of the villa, William & Edna Forsyth, would not be returning. Not together! A romantic at heart, Greenlee had to have known this chapter in the fascinating story of the sentinel of East Crooked Lake was nearing its end.

Forsyth Villa, now nearly a century since William & Edna first moved in, still sits pretty on its terraced green. And the villa has indeed enjoyed additional chapters during its 100 years, but this blog will be a celebration of the villa’s first chapter – that time period poet Greenlee desperately wanted preserved.

Who amongst us today recalls the early 20th century dreams and aspirations of those who formed Lake County Country Club in 1921? Who recalls that the player some refer to as “PGA’s first Super Star of Golf”, came to Eustis to play 18 rounds of golf on the shore of East Crooked Lake? Walter Hagan (1892-1969), “four times winner of the British Open,” played golf at Lake County Country Club in February 1937, and the Eustis Lake Region reported: “he was both pleased and surprised with the unusual course.”

“Built about 1921,” related the Eustis Lake Region, “it has become recognized as one of the finest and sportiest 18-hole golf courses in Florida.” Today, if it were not for “Country Club Road” and “Fairway Avenue,” one could find it a stretch to believe a golf course ever existed here, or that this golf course had been the impetus for development on East Crooked Lake. 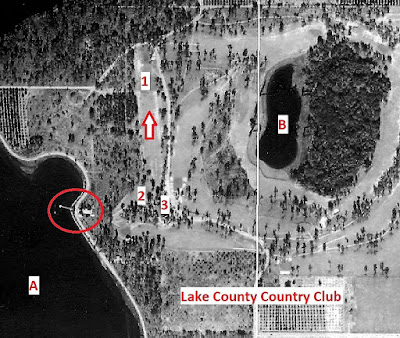 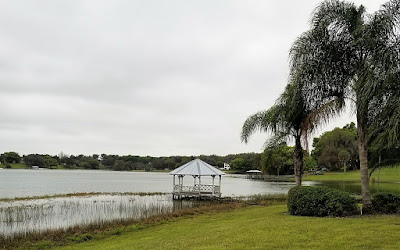 The 1921 Lake County Country Club encouraged developer William H. Goulding, on August 22, 1922, to acquire acreage fronting the previously little-known East Crooked Lake. On that land, Goulding built a cottage that was to become the Forsyth Villa.

Prior to the 1920s, West Crooked Lake had long-been popular with pioneers. Frank Savage, after first exploring this far corner of then Orange County in 1876, filed a homestead claim on West Crooked Lake and built a residence. In 1881, Colonel Gould H. Norton (see Lake County Home #9) homesteaded on the north shore. But not until the “Roaring Twenties” did East Crooked Lake begin to catch the eye of developers. And it was the Lake County Country Club that encouraged this further development.

(Lake County Country Club was built on the west half of the original Alexander St. Clair-Abrams homestead of 1875 as detailed in Chapter 1, The Grand Celebration, of my book, Tavares: Darling of Orange County, Birthplace of Lake County. Lake Alfred, named by St. Clair-Abrams for his son Alfred, was part of the golf course. Today, Lake Alfred is the home of Hidden Waters Preserve). 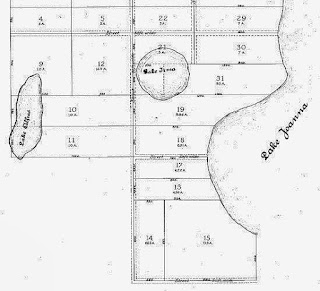 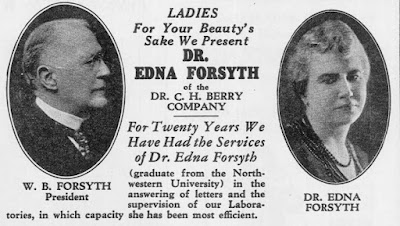 The winter home on East Crooked lake was in fact acquired by Edna Forsyth, and the local paper later reported the couple had moved into the home May 13, 1925. William obviously approved of his wife’s selection of their winter cottage, for four months later, on September 24, 1925, the Eustis Lake Region published a letter to the editor under the heading “Forsyth Villa.”

Signed “W. B. Forsyth of East Crooked Lake”, the snowbird from Chicago wrote to the editor about the need for better roads in Lake County, citing too the advantages if locals would greet visitors with “a warmer welcome.”

Lake County Country Club and adjacent Forsyth Villa became regular gathering places. Forsyth Villa even became a place to worship one day each week. Seventh Day Adventists worshipped at the Forsyth’s home each Sabbath. William and Edna were both civic minded, and entertained at their home and, on occasion, at local schools: “Mr. W. B. Forsyth,” reported Eustis Lake Region of December 21, 1939 of local fourth grade festivities, “who passed 91 Christmases, entertained the children with songs.” 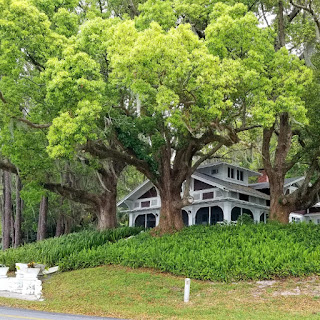 Forsyth Villa, "atop the terraced green".

The same newspaper delivered the sad news of the death of W. B. Forsyth eleven months later. William died at Chicago at age of 92. “He is survived,” the newspaper reported, “by his wife, Dr. Edna M. Forsyth.” Edna did return to Forsyth Villa on East Crooked Lake occasionally, such as during the census of 1945, when Dr. Edna Forsyth was recorded as residing at the villa. But the 1945 census was also the last recorded presence of Dr. Edna Forsyth in Lake County. And that September, Herbert Greenlee penned his poem Forsyth Villa.

“The villa, though, is not the same,

There is a certain lack,

And will be – until you proclaim,

That you are coming back.

Edna Agnes Maud Dolson, born November 22, 1871 at Ontario, Canada, married first at the age of 15. Leopold A. Wellwood, her first husband, was a law student. Edna (Dolson) Wellwood then married a second time in 1892. Fletcher H. Thompson, her second husband, was a dentist. Edna also became a dentist, and in 1900, the Thompson’s were residing in Chicago, where her future husband, William B. Forsyth, was managing the C. H. Berry Company. Edna was listed as a dentist in Chicago’s 1910 Directory, and the following year, she and William Forsyth married.

“Across the winding road are seen,

As painted on a liquid screen

Are heaven’s pictures there,

For western lights are sweeter when

They rise again on high,

Where evergreen’s wave back again,

Their greetings to the sky.

Forsyth Villa is once again in good hands, and I do believe, somewhere here in Lake County, another poet is now itching to spread their wings.

Korean War Combat Artist Gene Packwood relocated to Lake County and in 1991 sketched the Forsyth Villa as shown above as the "Tree House circa 1925".

Only a portion of the information above - the history prior to the 20th century - is borrowed from my book, Tavares: Darling of Orange County, Birthplace of Lake County.

5 Stars: "A well-written book, heavily based on government records of land transactions. Very interesting and informative. Highly recommended for the locals and those with a family history in Lake County."

5 Stars: "Excellent book! Thank you so much for sharing your passion for local history and your exhaustive research on Lake County."

BUY IT NOW at Amazon, simply click on the book cover! 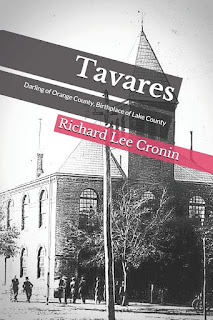 Popular posts from this blog

The Cornelius Home at Mount Plymouth 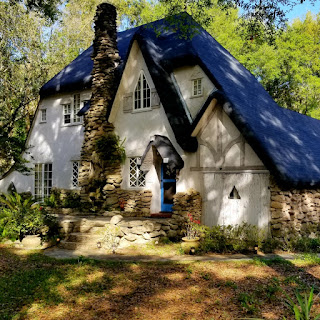 The Cornelius House of Mount Plymouth George Martin Cornelius (1866 – 1946)   The “ Gingerbread House ”, as it is often called, is today an icon of Mount Plymouth . Designed and built by Chicago artist turned Orlando architect-builder Samuel Stoltz , the home was built in 1927 for George & Alice (Hooper) Cornelius . More formally known as The Cornelius , this architectural wonder served for a decade as the winter cottage for the Cornelius family of Indianapolis, Indiana, but also proudly stands today as testament to the enduring spirit of America’s incredible pioneers - especially the brave souls determined to tame the wilderness of central Florida.   Business Card of George M. Cornelius, Indianapolis, Indiana   A Rich Wayland The Cornelius home was built on land that four decades earlier had been part of the homestead of Robert B. Rich . A deed of 120 acres, a portion of which bordered Lake Plymouth of today, included land which became Fairways 7, 8, 9 and 10,
Read more 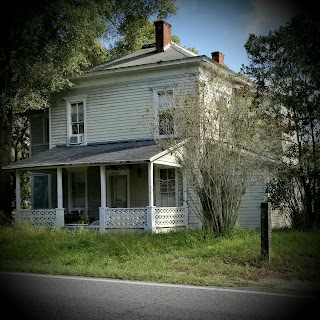 HISTORIC LAKE COUNTY HOMES Part 1: The Brock & Fisher Residence (1900)   County Road 439, Seneca, Florida   If hundred-year old residence walls could speak, imagine the spellbinding stories we would learn about central Florida’s history. Inanimate walls however remain silent throughout the passing of decades, and so we can look instead to deeds, and other sources, to learn of the extraordinary men and women who, in the 19 th century, migrated to Florida’s Citrus-Belt and built some of Lake County’s earliest homeplaces – some of which are still standing today. Learning of such amazing pioneers is the mission of this blog series – an undertaking that will include writing of the bravest of brave pioneers – men and women - pioneers who played a role in helping to tame a remote wilderness, and while doing so, left behind a memorial in the form of their own personal homeplaces. The Brock & Fisher Residence is one such homeplace. Today, dozens of vehicles pass by this hist
Read more